View the video By Joshua Botello Bookkeepers and accountants are professionals that help your business manage the money in your company and are worth their weight in gold. Accountants charge a hefty fee, while some bookkeepers run a simple business. But when do you need a bookkeeper and when do you need an accountant? In this video, I’ll cover what each professional does and stay till the end to find out which one you might need. What’s a Bookkeeper or Accountant?So let’s start with what is a bookkeeper

Changes to Reporting Injuries and IllnessesEmployers must connect their Injury Tracking Account to a Login.gov account to submit their 2022 workplace injury and illness data next year (see the Safety Q&A for more information).Read More

By CalChamber -October 25, 2022 As the California Division of Occupational Safety and Health (Cal/OSHA) prepares to vote on the next iteration of California’s COVID-19 emergency regulation, one important change being considered is whether to extend California employers’ obligation to provide exclusion pay to all workers out on leave. Current Regulation Expires December 31, 2022 California’s current COVID-19 emergency regulation expires at the end of this year, and the Cal/OSHA Board will be voting on a

Universities Honor Senator Anthony Portantino as Policymaker of the Year

Sacramento, California – Senator Anthony J. Portantino (D – Burbank) was named the 2022 Policymaker of the Year by the Association of Independent California Colleges and Universities (AICCU).   Senator Portantino received the honor during AICCU’s Annual Meeting.  He was recognized for his dedication and leadership to ensure that California’s diverse student population has access to affordable higher education.“I am honored to receive the AICCU Policymaker of the Year Award,” stated Senator Portantino. “I

By Susanne T. StirlingOctober 12, 2022 World trade will lose momentum in the second half of this year and remain subdued in 2023, according to the updated outlook released by the World Trade Organization (WTO) earlier this month. In the trade outlook, released on October 5, WTO economists attributed the slowdown to multiple shocks on the global economy as import demand softens, Europe deals with high energy prices due to the Russia-Ukraine war, monetary policy tightens in the United States, China

By  CalChamber -October 5, 2022 In this episode of The Workplace podcast, CalChamber employment law expert Matthew Roberts and CalChamber policy advocate Ashley Hoffman discuss five new labor laws employers should know and prepare for: SB 1162; AB 152; AB 1949; AB 1041; and SB 1044. The California legislative session has finally come to a close, and this year there are a number of new labor laws that will really affect employers, Roberts says in kicking off the podcast. Unless stated otherwise, these

The EconomyBy Dave Kilby -September 28, 2022 The Drumbeat of a Recession Is Growing Louder, But It Is Probably Not Here Yet We are sure in an odd place, economically speaking. Job growth is solid, and households keep spending money. Yet the world seems to think we are in a recession. Question: What is the opposite of a jobless recovery? A recession without layoffs? Is that a recession? We are also in a quirky time with data continuing to be volatile due to the ebbs and flows of consumption and supply

As an entrepreneur, you can use technology in many ways to give your business a competitive edge. From cloud computing to artificial intelligence, cutting-edge developments make it easier than ever to streamline processes and reduce redundancy at the workplace. Even small businesses without large tech budgets should consider getting tech tools. As Winman reveals, continual investment in innovation helps to boost productivity, enhance efficiency, finetune quality, and boost customer service. Discover how

By  CalChamber -September 6, 2022 AB 152 (Committee on Budget) COVID-19 Supplemental Paid Sick Leave passed the Legislature on August 31 and awaits action by the Governor. The bill establishes the COVID-19 Relief Grant Program within the Governor’s Office of Business and Economic Development (GO-Biz) to help qualified small businesses or nonprofits with grants up to $50,000 to reimburse COVID-19 supplemental paid sick leave provided between January 1, 2022 and December 31, 2022. Continue 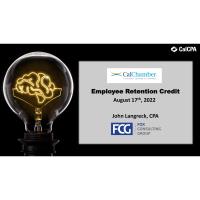 Click the image below to view the presentation regarding ERC qualifications. ERC Revenue Test Form (Template to determine eligibility for ERC under the revenue test)